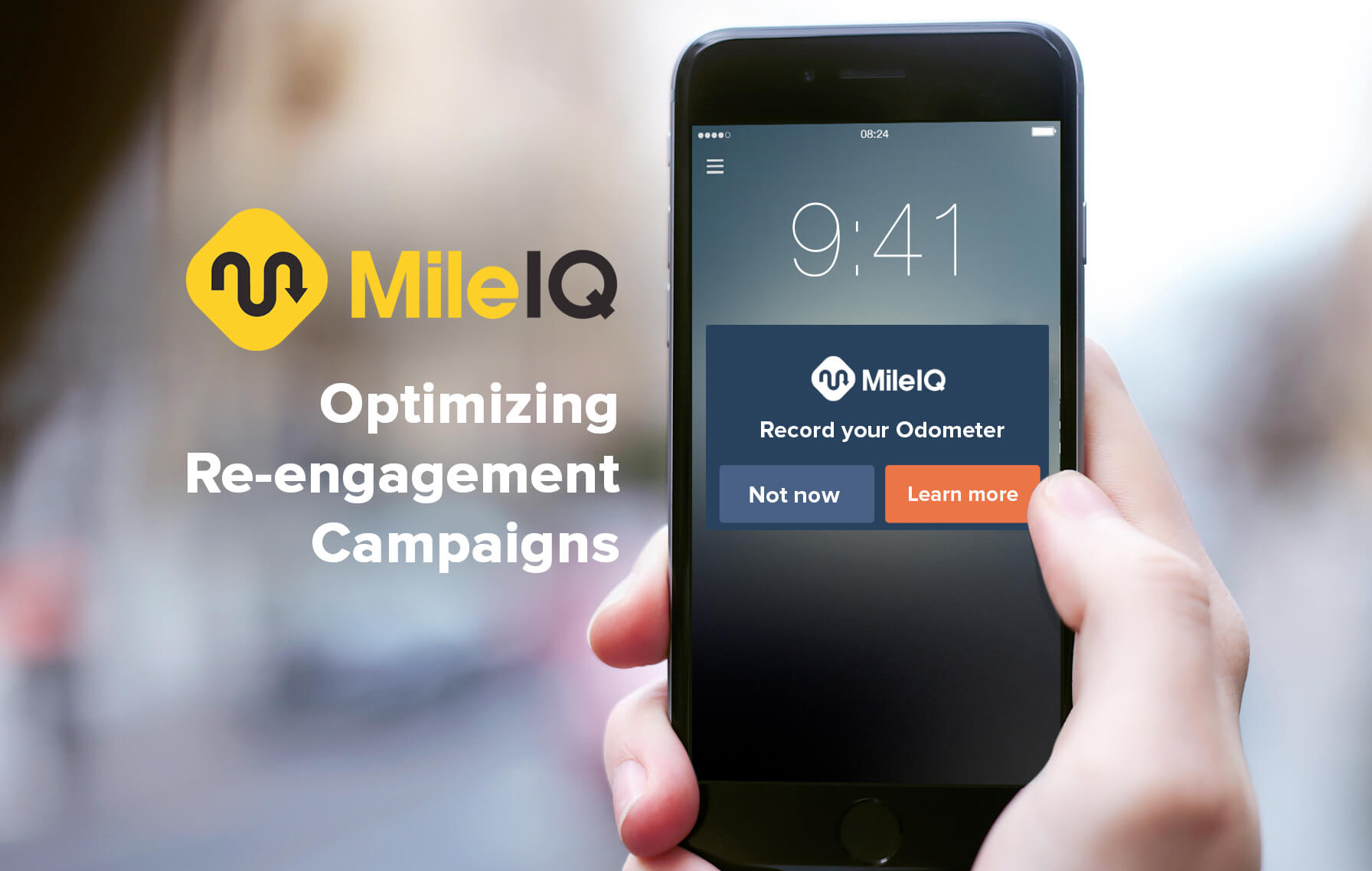 Guest Blog: Colette Nataf is the CEO and Co-Founder at Lightning AI. Previously, Colette was a User Acquisition Manager at MileIQ. After the company was acquired by Microsoft, she managed the Demand Generation team at Intercom. Colette is now helping marketers scale their businesses through Facebook, Google AdWords, and other channels.

As the Mobile User Acquisition Manager at MileIQ, the leading automatic mileage tracking app, my job doesn’t end when a new user installs the product. Sure, driving new app installs is an important task, but in my role I am responsible for everything from install to purchase, retention and long-term engagement. That means investing a great deal of energy into re-engagement campaigns, to educate new users about the benefits of our app and encourage them to become a subscriber.

Re-engagement is especially important for us during tax season, when users are focused on doing what they can to get the best mileage deduction possible. For MileIQ, this time of year is as important to our bottom line as Black Friday is to retail apps.

To move users down the MileIQ in-app funnel, we make use of a variety of re-engagement tactics including retargeting ads, push notifications, in-app messaging and emails. Over time we’ve learned what works to increase conversions and what doesn’t. And while there is always room for improvement, there are 3 key strategies to making re-engagement work effectively:

Before we begin a new campaign, we analyze how users move through our funnel and look for two things:

The data we gather informs us as to where we focus our efforts. For example, we’ve found key engagement actions that are heavily correlated with upgrading to a premium MileIQ subscription. Knowing that, we use retargeting and push notifications to encourage users to take those actions and eventually upgrade their subscription.

There’s also a critical timing component to our re-engagement campaigns. Our analysis has shown a time period during which users are most likely to upgrade, so we use that information to re-engage users and increase app activity while the iron is hottest.

Re-engage with a Clear Purpose

Each engagement with your users should have a clearly defined purpose. Keep in mind this does not have to be a transaction-oriented. For example, at MileIQ, we send a push notification to users at the beginning of the year to remind them to record their odometer because an accurate odometer reading is critical to earning an ideal tax deduction. Even though the push notification isn’t directly designed to increase subscriptions, it is an on-brand message that adds value to our users and helps increase engagement. We also send optional push notifications any time MileIQ detects that a drive has taken place, bringing the user back into the app to classify it as business or personal.

Email is another tool we use to increase user engagement without actively promoting an upgrade. At the end of each week, all users receive a personalized email with a summary of their mileage log –including a breakdown of miles, drives recorded and the amount of money earned towards a tax deduction.

What most new users will see in their first weekly email is that classifying just one drive earns enough money toward a tax deduction to cover the cost of a monthly premium subscription. So even though the email is a helpful resource that gives users a powerful visual of how MileIQ is serving them, it doubles as a sales pitch that educates users on how cost-effective a premium upgrade is.

The mantra of the UA team at MileIQ is simple: whatever we’re doing now, we can do better in the future. We take a very data-driven approach to our work, so we’re constantly evaluating current campaigns, looking for areas in the funnel that can be improved, and A/B testing to make those improvements come to life.

Whether it’s testing a new button color, a word in the ad copy, an image or a call-to-action, there is always a way to increase conversion rates and user engagement. A prime example of our dedication to testing lies in our onboarding process, which consists of several emails over a four weeks.

These emails are part of an ongoing experiment – we’re always testing the number of emails we send a new user, as well as the content of those emails. Our goal with onboarding emails is to help new users get the most out of MileIQ while also preemptively answering any questions they may have to take some of the pressure off of our customer support team.

These emails have a huge impact on whether or not new users will upgrade to a premium subscriptions so it’s been critical to optimize their effectiveness.

Re-engagement campaign optimization is all about determining what actions you want your users to take, finding out where they are stalling in the funnel, and driving those users toward converting with extensive A/B testing. Keep the above strategies in mind when planning your own re-engagement campaigns and you’ll be well on your way to building an active, loyal user base.