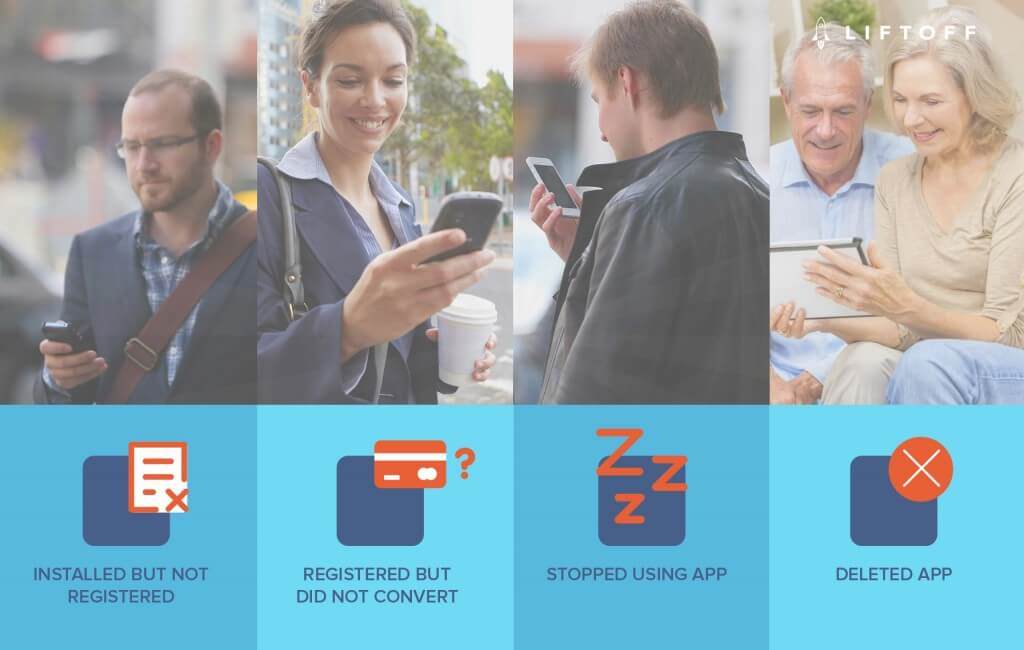 As a Customer Success Manager at Liftoff, I work with app marketers across a wide variety of non-gaming app categories, optimizing app install and mobile retargeting campaigns to drive high rates of in-app conversions. And while every app has it’s own unique characteristics – be it target demographic, in-app funnel or revenue model – when it comes to segmenting audiences for purposes of retargeting, most apps take a similar approach. This includes:

For most mobile marketers implementing re-targeting campaigns, starting with these 3 segments is good common sense. Each segment exhibits distinctly different behavior, providing guidance as to what message to communicate in retargeting ads or push notifications.

Of course, these audience segments are quite general. You can easily go deeper and segment your users by factors such as the last time the user opened the app or where a user dropped off in the funnel. And in fact, the more specific you can get with your audience segments, the more relevant your messaging and creative can be which, in turn, helps increase engagement and conversions, especially on mobile.

For the purpose of this blog post though, we’ll keep things relatively high level and propose that, when starting out with a mobile retargeting campaign, begin by segmenting your users into two groups: (1) users who stop engaging with your app, and (2) new app installs.

Read more: Maximize the value of your app with The Liftoff Guide to Mobile Re-engagement

Users who stop engaging with your app

One of the biggest benefits of re-engagement is the ability to group users by shared qualities. In this instance, the similarity is that they were previously active users of your app but no longer are. You can group these users by, say, users who haven’t used the app in the last 15 days, and target them with compelling ad creative geared toward account reactivation and post-install engagement.

The advantage of grouping users by shared qualities is that you are able to serve them the most relevant ad based on their situation, increasing the likelihood that they become active again.

For example, let’s say I’m marketing a run tracking app and discover that a majority of my users are active for only the first month after they download the app. Between the second and third month, 55% of my users stop using the app on a weekly basis or delete it entirely.

Instead of watching those users disappear, I can build a re-engagement campaign that targets users who haven’t tracked a run in more than 30 days. With ad creative that encourages them to start tracking their runs again, I am delivering a message that is likely relevant to most users that fall into this segment..

Another great thing about mobile retargeting campaigns is that they can help increase post-install engagement among new installs. While the average app will lose nearly 90% of its daily active users within 30 days of the initial install, retargeting campaigns can be incredibly effective in turning new app installs into active, loyal users.

To illustrate further, let’s say that I am marketing a music streaming app and discovered that users who listen to four songs within the first five days of install are 65% more likely to upgrade to a premium subscription. To increase my subscription rate amongst new app installs, I might set up a retargeting campaign to run 24 hours after they first opened the app, encouraging them to listen to their favorite artists. I would also utilize push notifications to do the same, while testing and optimizing both the message and deliver time.

For users who listened to 2-3 songs during the first five days, I would customize my messaging even further by offering a free trial of the premium subscription. Knowing that this segment has a greater interest in my app, a free trial may be enough to get them to subscribe.

The biggest advantage of re-engagement campaigns is the ability to serve highly relevant messaging to users who have already expressed interested in your app. With expertly crafted campaigns and a smart audience segmentation strategy, re-engagement can help bolster your current user acquisition efforts and get your inactive users re-engaged.