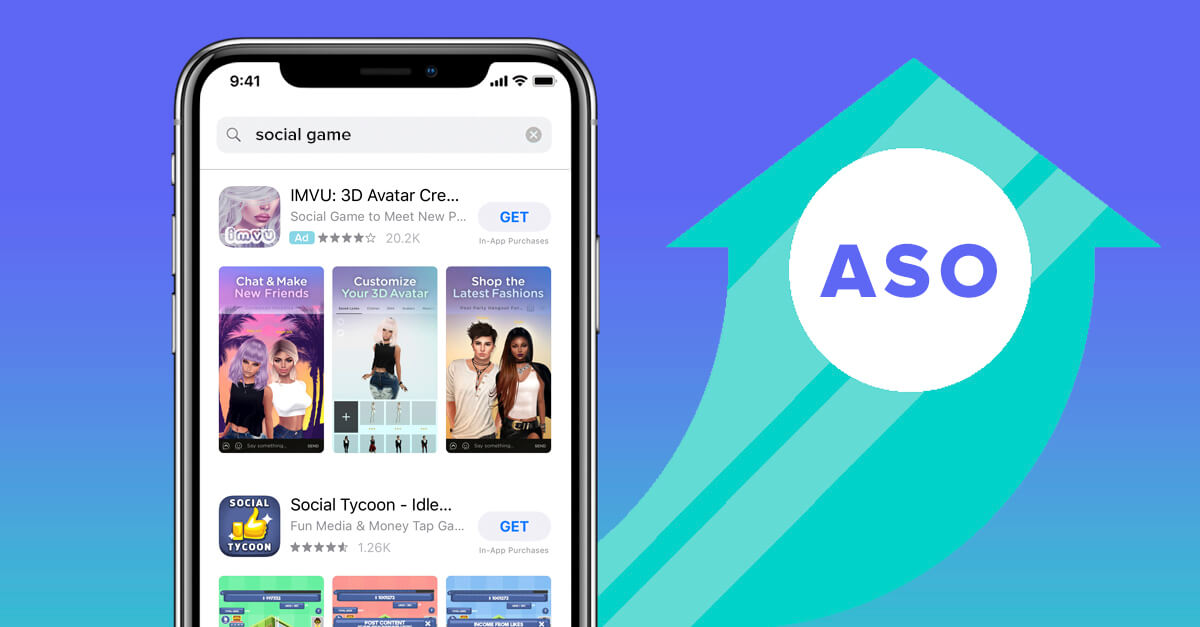 Lomit Patel heads up the Growth team at IMVU which is responsible for driving user acquisition, retention and monetization across all platforms (iOS, Android, and Web). Lomit is a seasoned growth marketing executive with expertise in building and scaling up customer acquisition, retention and monetization channels at early and mid-stage consumer tech startups.

No matter how good an app may be, it won’t succeed if users can’t find it and download it. While this may go without saying, it’s the reason why proper mobile app marketing and App Store Optimization (ASO) are key to an app’s success. Apple Search Ads is a vital component of an app’s marketing and ASO strategy, as well as a key factor of IMVU’s success in the App Store.

How did Search Ads help IMVU succeed? Let’s take a look at Search Ads, ASO and their impact on IMVU.

What are Search Ads?

Apple Search Ads is a tool that lets advertisers bid on ad space in the App Store. Rather than a pop-up ad or commercial, the advertisement works simply by placing the app at the top of the search results for the bid upon keywords within the App Store. Not only does this provide increased visibility, but also targeted advertisements directed at users who are already searching for similar apps.

Search Ads can be set to defined demographics, such as gender, age and location, as well as target groups like new customers or users who have downloaded other apps from the developer. Additionally, as it’s priced at a cost per tap (CPT) model, you only pay when a user taps on the ad.

While developers can bid on multiple keywords, including variants such as misspellings and plural/singular versions (Broad Match) or specific terms only (Exact Match), they must be relevant to the app. Both the relevance and bidding amount factor into whether or not Apple puts an app into the auction for a specific keyword.

IMVU utilized Search Ads to increase its visibility and installs for important keywords like “social networking” and “virtual games.” Users searching for those terms would see IMVU at the top of the search results, which encouraged them to view the app and download it.

Search Ads are also a key part of App Store Optimization. While an app’s relevance to selected keywords impacts whether or not it can successfully bid on them, building relevancy to high-volume keywords is an important aspect of ASO. Utilizing the targeted keywords consistently and properly in an app’s metadata and description helps build relevancy for the terms, which in turn improves its Search Ads performance.

However, this also works the other way around – an app’s success in Search Ads for certain keywords can help shape its ASO strategy.

During the optimization process, IMVU test its keywords live using a Search Ads campaign. The results of that campaign helped us understand the app’s performance for certain keywords and demographics, which was essential for determining IMVU’s ASO strategy. By tracking key performance indicators for the targeted keywords, we determined which terms provided the best results, as well as what new keywords were worth exploring, and could focus on those.

As Apple indexes top ranking apps by their click-through rate (CTR) on a keyword-by-keyword basis, Search Ads helps build a positive CTR for the terms it targets. This helps improve the app’s rankings for those keywords in organic searches. As such, IMVU’s Search Ads campaign not only helped identify valuable keywords to target, but also improved its ranking and performance for them.

Additionally, using Search Match and Broad Match can help app developers identify relevant keywords they may not have considered before. This provides more actionable content and feedback for the developers which can be used to shape the app’s ASO.

When utilizing Search Ads, developers and marketers should keep certain best practices in mind. After launching a campaign, one should leave the bids and budget alone as the Search Ads algorithm goes through a learning phase. It is, however, advised to adjust bids and budget in small increments over time, thus tweaking the campaign for optimal results without disrupting it unnecessarily.

Developers should set a Discovery campaign to test potential keywords, like IMVU did when testing “social networking,” “chat” and “virtual” keywords. The campaign should be optimized for KPIs based on performances on a keyword level, with the most aggressive bids for the most important keywords.

Additionally, Search Ads allows creative sets with three images. These are useful for testing the performances of different sets as well as targeting specific demographics with imagery that appeals to them.

Apple Search Ads were an essential piece of the ASO puzzle, both for exploring keyword performance and improving visibility and reach. They helped IMVU improve App Store Optimization by increasing the number of keywords that we ranked #1 on the App Store for by 33%, along with a 58% growth in the top 5, contributing to a 105% increase of daily installs on iOS devices. While there are many parts that factor into a successful ASO strategy, Search Ads proved to be an invaluable piece of the puzzle as well as drive good quality users into our app.