Amazon Prime Day Was Great for Amazon, But What About Other Mobile Shopping Apps? 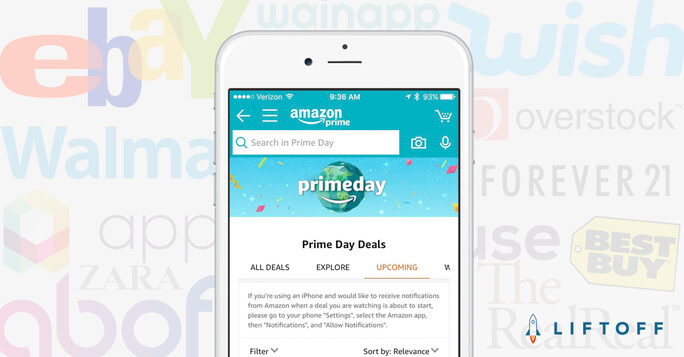 On Tuesday, July 11, Amazon held their 3rd annual Amazon Prime Day, selling deeply discounted products for one day only (30 hours actually), resulting in Amazon’s biggest sales day ever in the history of the company. Like many Americans, I too was drawn to their deals, scoring a new Amazon Echo, a couple smart plugs, even an Instant Pot (yes, I too recommend this beauty). But working in the app marketing industry, I couldn’t help but wonder, what impact does Amazon Prime Day have on other e-commerce businesses, specifically those with a mobile app. Does Prime Day have a halo effect and increase sales amongst Amazon’s competitors? Or does it hurt them?

Across the entire week, the percentage of users who installed a non-Amazon shopping app and made a purchase in the app actually increased by a whopping 46.76% compared to the prior six weeks. At the same time, the overall % of shopping app installs decreased by 2.84%, suggesting that while slightly fewer people installed shopping apps throughout Prime week, those that did, did so with a very high intent to purchase.

Even more interesting, when we look at a daily breakdown of the install-to-purchase rate throughout Prime Week and calculate the lift in purchases compared to the prior six weeks, we see a very distinct and meaningful trend. For mobile commerce marketers, while they may see their sales take a hit on Prime Day, Prime week presents a huge opportunity for driving meaningful sales and revenue. Whether you call it the new Black Friday, Black Friday in Summer, or Prime Week, the week presents a huge opportunity for e-commerce marketers to drive meaningful sales and revenue on mobile.

Note: this report is based on an analysis of over 4 million mobile ad impressions, 844,069 app installs and 17,313 purchases within non-Amazon mobile shopping apps.