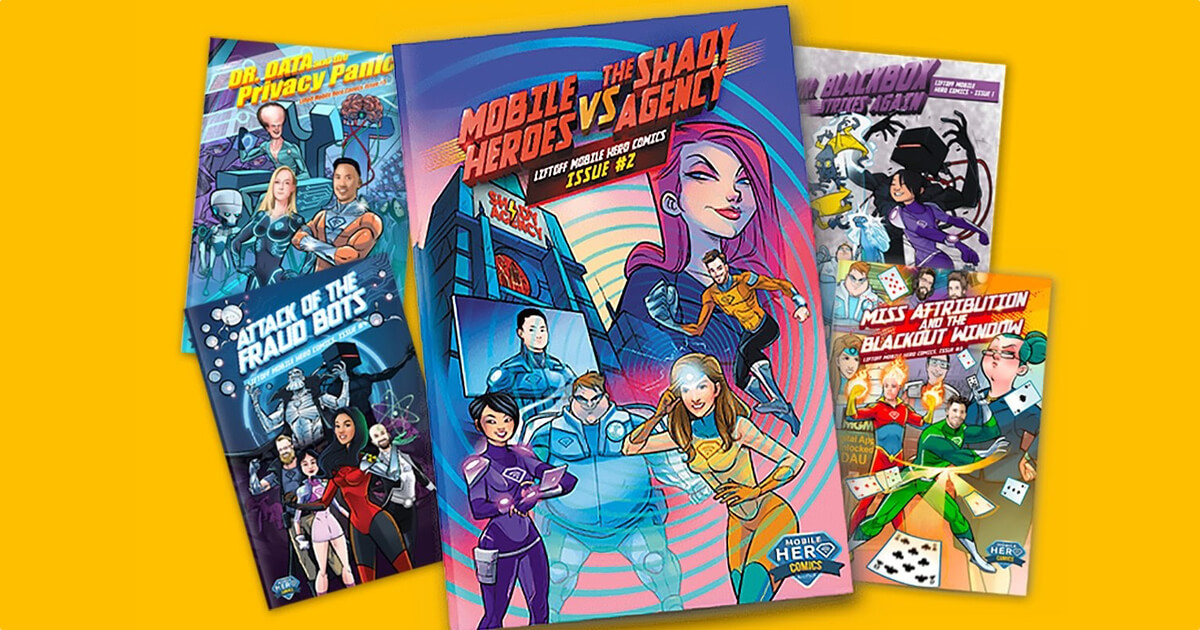 Issues like bot fraud, misattribution of sales to the wrong ad or publisher, and data privacy are big concerns, but rarely fun to read about. That was before the Ice Man, brain-sucking Dr. Data, and a growing cast of mid-level marketer superheroes from marketing tech firm Liftoff started turning thorny issues of digital marketing into comic books.

Mobile Hero Comics has grown out of a five-year-old program that grooms app marketers as thought leaders posting blogs and hosting live meetups. The program has developed 100 such heroes and plenty of earnest blog posts on user acquisition tips, privacy rules and the like.

But Liftoff VP-Marketing Dennis Mink admits the creative energy of his content team was lagging when a small Mexican design firm approached him with the idea of creating a comic book from the Mobile Heroes more than two years ago. Mink won’t identify the firm, which he sees as a trade secret. But the comics, now with five editions, have breathed new life into battles against bot fraud, unscrupulous ad agencies and privacy predators.

They later joined forces again to foil Shady Agency, run by Miss Information, which has signed a huge deal with “eMart” through which the agency secretly plots to pocket lots of money by delivering low-quality app installs from incentivized traffic. It turns out, Shady Agency was acquired by holding company Black Box, which really was pulling the strings.

In another episode, supervillain Miss Attribution works with evil ad retargeting vendor Retarget.co to steal credit for user acquisition by immediately serving ads to people right after they install apps. The moral of the story is to make sure you have a “blackout window” with your re-targeting vendor to ensure some time and an event—such as a purchase—stand between the install and the ad re-targeting.

Just like in real comic books, characters sometimes die. Mink says Frost actually asked to have his character killed off, so he met his doom at the hands of Dr. Blackbox and his fraud bot army in Issue 4. “But it’s a comic, so you’re never really dead,” Mink says. “Just to have fun with Drew, we will be bringing back his character.”

Lin, a.k.a. Mash, is a bit of a superhero in real life, having impressed Mink by once challenging him to do Crossfit with her a day after she ran in the San Francisco Marathon. Being a comic book hero also has impressed her co-workers, who’ve posed alongside her and a sticker of Mash in the office. Lin believes the comics helps draw attention to more serious blog posts and podcasts.

“The coolness factor is high,” Bienenstock says of being a comic book character. “Externally, it definitely gives more visibility to the heroes,” leading to more speaking engagements and such.

So far, only 14 out of 100 of Liftoff’s Mobile Heroes have emerged from the world of more subdued blog posts, podcasts, lunch clubs and webinars (real-life and virtual) to enter the comic realm.

The supervillains generally don’t get real-life identities, with one exception being James Peng, head of performance marketing at Singapore ride hailing and food delivery service Grab, who was revealed as the secret identity behind Dr. Blackbox.

Despite some resemblance, Dr. Data, the supervillain in the most recent issue who heads “The Social Network” and sucks info directly out of people’s brains to satisfy his insatiable appetite for personal data, is definitely not Facebook CEO Mark Zuckerberg.

And while things like bot fraud concern a lot of big-name marketers, you will never find Procter & Gamble Co. Chief Brand Officer Marc Pritchard donning tights and a cape in Mobile Hero Comics.

Mink prefers mid-level app marketers—the core customers for Liftoff’s user acquisition & retargeting services—in part because he started noticing even before the comic books that Mobile Heroes were tending to move up to better jobs in or outside their original companies.

“Seeing how this is leading to new opportunities for them, I started looking for app marketers in mid to mid-senior levels of their careers,” Mink says.

Mobile Heroes don’t have to be Liftoff clients, he says, and many aren’t. Still, the program has been good for business. An internal analysis found Mobile Heroes on average remain Liftoff customers three times as long as non-heroes and generate more revenue. Inbound requests from marketers who want to become Mobile Heroes also lead to customer acquisitions, Mink says. “We probably get 30 or 40 self-nominations a year. It will typically open up a conversation.”